8.1 Much of the special architectural interest in Shearsby has been recognised through the Grade II* listing of the Church of St Mary Magdalene and the Grade II listing awarded to seven other buildings within the conservation area boundary (see Appendix A for details).

8.2 Special interest in a conservation area is not only formed by the buildings but also the spaces between them, and other features of interest. These can include the settlement layout, green infrastructure, open spaces views and public realm. The arial photograph below is from 1945 and shows little change from the 1885 map. The photograph shows the settlement within the rural setting with the green infrastructure and open spaces clearly visible. 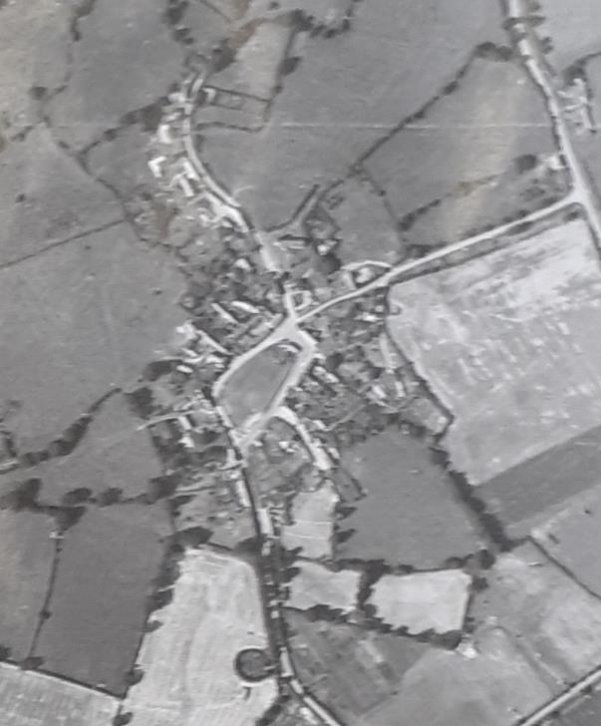 8.3 At the centre of the conservation area lies the 100m long enclosed open space of the Green with an encircling road (visible in the above map). This is a typical village green at the centre of village life. It has a children's play area in one corner and usually houses local events, such as the fete. It had been the gardens to a Rectory which had stood at the western end of the Green. At the lower narrower end of the Green is The Square which contains some substantial houses that overlook the Green and small red brick cottages at the edge of the Green flanking it. The Green is enclosed, partly by these buildings, partly by a red brick wall to the south and by trees and hedges. In one corner of the Square is a small, grassed area with a K6 telephone kiosk (now housing a defibrillator) and a water pump which both contribute to the rural village character of the conservation area.

8.4 Around the Green are cottages and more substantial houses in red brick or rendered. A number of these make a positive contribution to the setting of the Green and consequently the character of the conservation area. Overlooking the higher western end of the Green is the Grade II listed Cobblestones Cottage. This seventeenth century thatched cottage was originally location of the village cobbler. Next to this is Shearsby House. The 1889 sales particulars for this property and surrounding land included the clay pit, near to the spa on Bruntingthorpe Lane, from which Shearsby bricks were made.[6] 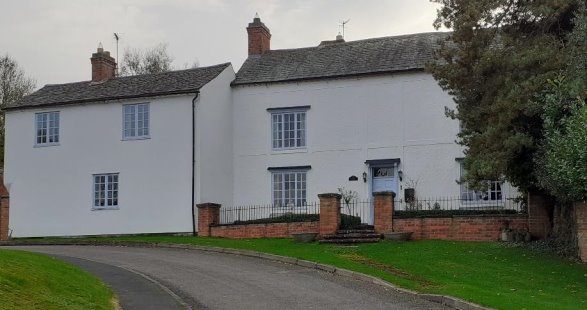 8.5 On Main Street, to the south, there are two buildings which particularly contribute to the setting of the Green -The White House and Field View Cottage. The White House, in the south eastern corner, is a substantial three-storey property with a two-storey annex attached all in painted white brick. It is constructed of local Shearsby brick. This previously housed the village slaughter house and butchery. 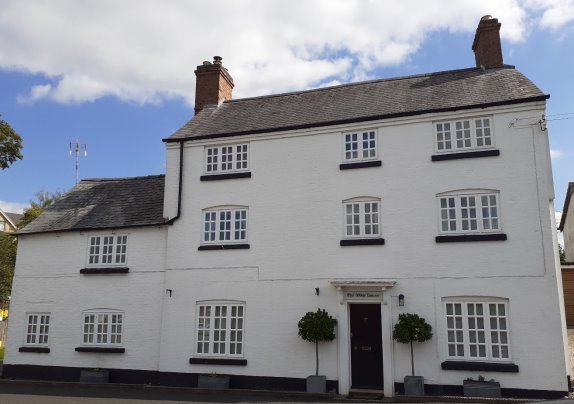 8.6 Field View Cottage lies at the western end of Main Street overlooking the Green at the point where the Rectory used to stand. The two-storey cottage is also painted white brick and during the nineteenth century it was the village Carrier's house and also a shop. 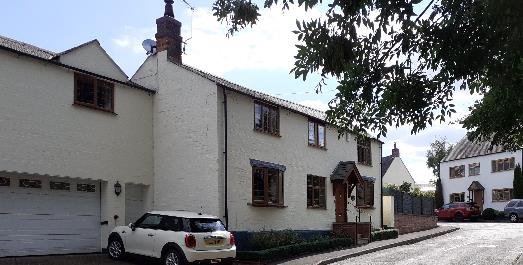 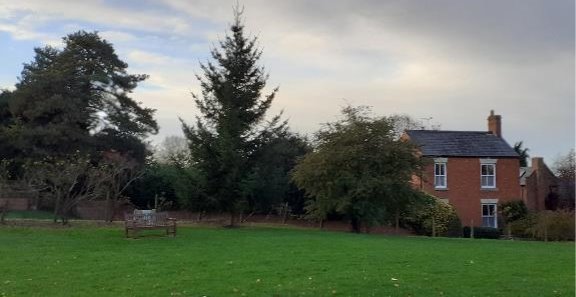 Thorpe Hill House viewed from the southern side of The Green

8.8 Fenny Lane is a cul-de-sac which leads off Main Street, rising up from the Chandlers Public House, named after the candle making business which was originally housed in the building, past the Grade II listed seventeenth century Woodbine Cottage (seen in the far right of the image below) and out to open countryside beyond the settlement boundary. The main entrance and frontage of the Chandlers is on Fenny Lane. The red brick two-storey building makes a positive contribution to the character of the village. It is built from local Shearsby brick. 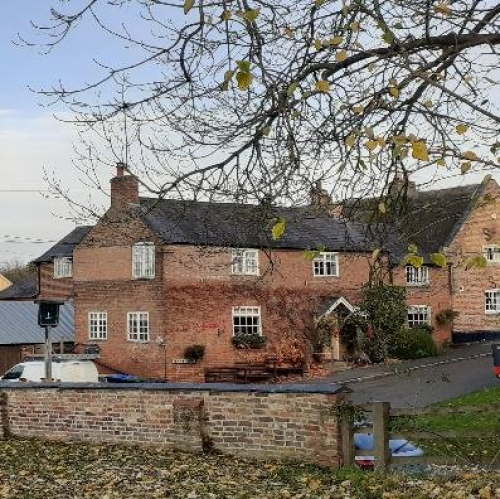 The Chandlers on the corner of Fenny Lane, viewed from The Green.

8.9 The rest of Fenny Lane is a mix of more modern houses and bungalows which have a more suburban feel, however, at the end of Fenny Lane is a field containing two footpaths. One leads south to Mill Lane where it is possible to join the Leicestershire Round and head to Bruntingthorpe. The other leads down to Bears' Hole and on to the north east side of the village where it connects to paths for Saddington, Fleckney or Arnesby. These footpaths provide views into and out of the conservation area for local people and walkers, some of which use the routes specifically to visit the Chandlers which is renowned for its selection of real ales. The footpaths provide a clear link between the conservation area and the open countryside which forms its setting.

8.10 Mill Lane leads out of the village from the southern corner of the Green. This is a narrow road with early cottages on both sides. The Grade II listed Rose Cottage was originally three small cottages which were alms houses. The cottage at the end of the terrace was occupied by the village cobbler. At the end of the two-storey cottage is a single-story annex which housed his shop. Next to Rose Cottage lived the baker who was also the miller at the mill on the other side of Mill Lane. Mill Lane rises out of the village passing the site of the old windmill mound and into open countryside. It is possible to get panoramic views of the countryside that surrounds Shearsby.

8.11 Back Lane leads directly into Shearsby from the A5119. The road drops steeply from the A5199 with a generous tree-lined grass verge which enhances the rural setting of Shearsby. It is very narrow and at its lower end is flanked by red brick buildings on a granite or cobble plinth. This creates a sense of entering the village. 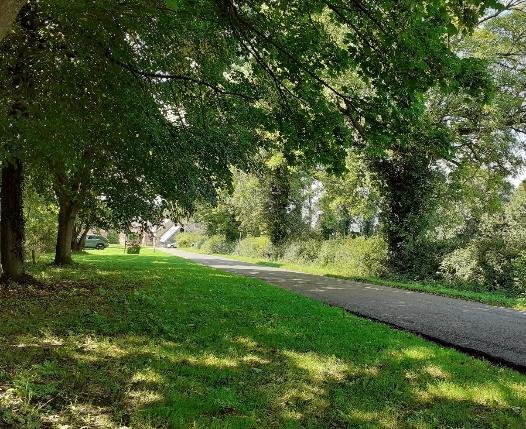 Back Lane leading into Shearsby.

8.12 A side road off Back Lane, Welford Road, slopes upwards past a number of houses and bungalows from the later half of the twentieth century. With a row of garages at the end of the cul-de-sac Welford Road has a more suburban character. An offshoot of Welford Road goes past the Cottage and round to the Bank where two 1960s bungalows are close to a row of old cottages. At the side of the 1960s lies a footpath leading to Bear's Hole, a small area of land where the fields on either side drop down to a shallow stream. This provides access directly out of the village to footpaths through the open countryside surrounding the village.

8.13 Church Lane leads north from the junction of Back Lane and the Square. The black and white fingerpost direction sign at the corner of Church Lane makes a positive contribution to the rural conservation area. Church Lane is a longer, winding no-through road that was at the heart of the development of the medieval settlement. Grange Farm House, a long and low red brick building sits well back at an angle directly in front of the church and looks outwards up Back Lane. The former farmyard has been sympathetically developed with the addition of two new dwellings.

8.14 The Grade II* church of St Mary Magdalene is of medieval origin but was extensively restored around 1880 and the tower was built in 1789. Its dominant location at the top of a high bank ensures that the country church on a hill is visible from points within and outside the village. The churchyard rises steeply with retaining granite walls. The squat sandstone church tower topped with an elaborate weather vane provide a visual stop looking up Church Lane towards the village. 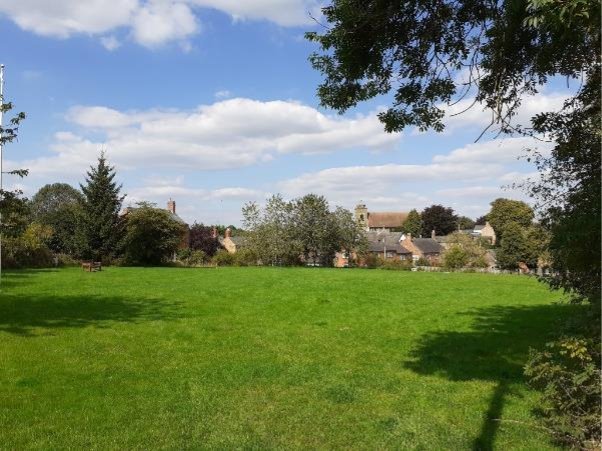 View showing the Church as seen from The Green.

8.15 Church Lane contains four Grade II listed buildings, including the timber-framed thatched Yeoman's Cottage which faces the church. Although the tie beam displays a date of 1699 the cottage has been dated to around 1453. Next to the Yeoman's Cottage and immediately opposite the church is the former nineteenth century village school, which is now the village hall. The building was sympathetically enlarged in 1997 and makes a positive contribution to conservation area. The building of a school in the nineteenth century and the re-purposing of it in the twentieth century evidences the developments within the village.

8.16 Church Lane winds past the Grade II listed Beanhill Farm House, Wheathill Farm House and Little Wheathill and Lime Tree Cottage, all of which are of brick and slate construction. The rest of Church Lane is a mixture of old and new former farmhouses, cottages, individual new houses and a close of 1990s houses whose materials, massing and orientation are in sympathy with the irregular form of building in the lane. The use of slate and thatched roofs for houses, cottages and farm buildings are notable features of both Church lane and the conservation area in general. Church Lane is a no-through road which leads directly into the surrounding open countryside and the footpath which provides the historic connection to the neighbouring village of Arnesby. 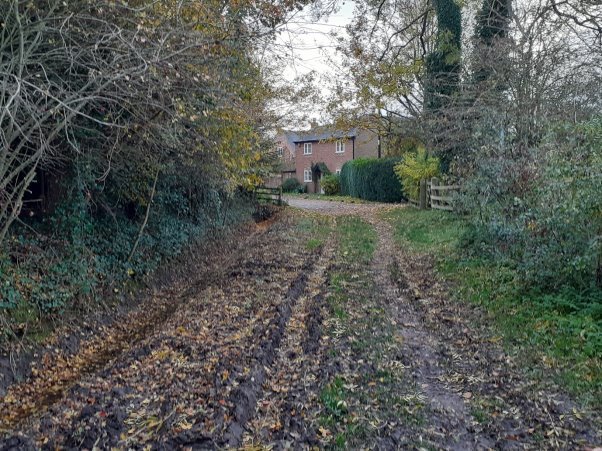 View into the conservation area from the end of Church Lane.