7.0 Historic Development of the Area

7.1 Three worked flints discovered in surface soil at New Inn Farm in 1956 demonstrate that activity in the area dates to the prehistoric period. A Roman coin dating from the fourth century was also found west of the church in 1990. Such discoveries are evidence of Shearsby's long history.

7.2 The name Shearsby indicates that it was part of the Danelaw and means it was the village of the Swaef, a minor chief of the Danes. There is documentary evidence of the village of Svesbi in the Doomsday Book of 1086, when a population of eleven households was recorded.

7.3 The settlement expanded during the early medieval period. The medieval street pattern is still evident in the village and earthworks in several areas just outside the modern settlement indicate the location of medieval houses. The Historic Environment Record refers to evidence quoted by Nichols from a document from 1660 that indicates there was a medieval manor house in the village.

7.4 Buildings of medieval origin remain on Church Lane, which would have been at the heart of the medieval settlement. Although heavily restored and altered in the eighteenth and nineteenth centuries, the church of St Mary Magdalene is of medieval origin and the timber-framed thatched Yeoman's Cottage opposite dates from around 1453.

7.5 Shearsby was connected to neighbouring villages by tracks and footpaths through the fields, many of which remain in use. The current A5199 was originally the Leicester to Welford Turnpike road, although a section of it was slightly re-aligned in the 1950s. This original section now lies south of the current A5199, it is outside the conservation area but has been designated as a local green space within the Neighbourhood Plan, where its historic value is noted. The turnpiking of this ancient road in 1765 resulted in the village of Shearsby being by-passed and this has contributed to the preservation of its quiet rural character for over two centuries.

7.6 Following the Enclosure Act passed in 1773, the open and common fields and pastures of Shearsby were enclosed in 1774. Enclosure divided the open arable fields into the patchwork of fields and hedges we recognise today. During his visit to Shearsby in 1790, John Throsby described the enclosed fields as 'good land'. On the day of his visit, he noted that although there were about 60 dwellings, the village was 'almost without inhabitants' as it was a 'fine harvest day'.[3] Ridge and furrow earthworks in the fields around the village provide evidence of the medieval open field arable farming system used prior to enclosure.

7.7 By 1801 the Return to Parliament recorded that Shearsby contained 61 inhabited and three uninhabited houses and at total of 249 residents (121 male and 128 female) of which 54 were chiefly employed in agriculture and 127 in trade, manufactures and handicraft.[4] The village expanded during the 1800s with the population increasing to 299 in 70 inhabited houses by 1875.[5] Employment was available at a range of businesses in the village, many of which were linked to the agricultural nature of the surroundings. These included seven farms, two fellmongers yards, a candle makers, and four public houses. One of these was a spa, approximately half a mile south west of the village, off the Bruntingthorpe Road. The site of a mineral spring was developed into a spa in the nineteenth century. People came to bathe in one of the two baths available on the site or drink the waters which were used for treating conditions such as rheumatism. The spa ceased to be economically viable in the early twentieth century. The two-bay white building housing the Bath Hotel wedding venue is now on the site of the spa (it lies outside the conservation area boundary). There was also a local blacksmith, a wheelwright, two shopkeepers and a baker who ground the flour at the mill on Mill Lane. A village school was built on Church Lane in 1860. 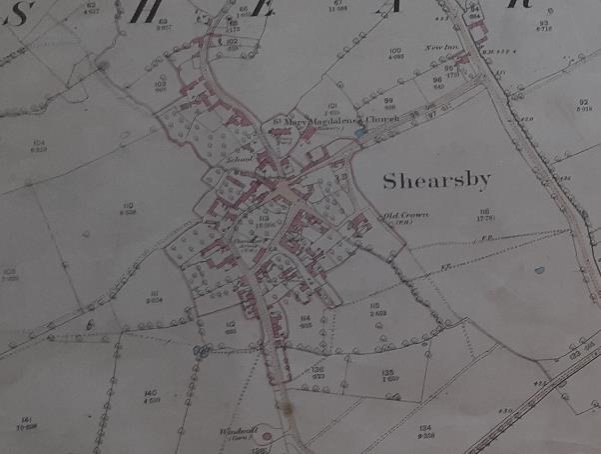 1885 Map of Shearsby (Record Office for Leicestershire, Leicester and Rutland)

7.8 With the village population declining in the early twentieth century, the school closed in 1937. It is now the Village Hall. The population had declined to 144 by 1951.

Image of Church Lane taken from the Church, showing Yeoman's Cottage and the former School building (extended in the 1990s) which is now the Village Hall.

[3] J. Throsby, The supplementary Volume to the Leicestershire Views: Containing a series of excursions in the year 1790, to the villages and places of note in the county (1790).