5.1 Shearsby lies in a hollow close to the A5199 Leicester to Northampton Road. It is 9 miles from Leicester and 7 miles from Market Harborough. It is located amid attractive hilly countryside in south Leicestershire. The Conservation Area embraces the entire compact village and includes Back Lane and the land either side up to the junction with the A5199 where there are some older buildings. It also includes peripheral open areas of pastures which are important to the overall character and settlement (see map in Chapter 1).

5.2 Shearsby is a traditional farming village. Much of its historic character comes from the relationship of farms and fields to the traditional housing and other buildings which form the settlement. It is characteristic of 'the more rural feel' attributed to the southern part of the Leicestershire Vales in Natural England's National Character Area 94.[1]

5.3 Location within a hollow contributes to the character and rural tranquillity of Shearsby. There are public benches located on Back Lane and Mill Lane which allow those entering the village to stop and enjoy the open countryside surrounding it. Although the village lies close to the A5199 there is little traffic noise, and the overwhelming sounds are of sheep bleating or birds in the trees. Other public benches are located on the village green and the green space to the rear of the garages on Welford Road. The two other roads leading out of the village, Church Lane and Fenny Lane, are both dead ends for vehicular traffic but they each give access to footpaths which take pedestrians directly out of the village and into open countryside. The footpaths within Shearsby are an important means of connectivity with the surrounding countryside and neighbouring historic settlements. The trees and hedges leading into the village, as well as those within it, contribute to the feeling of rural tranquillity and close proximity to nature.

5.4 Back Lane drops steeply from the A5199, with a generous tree-lined grass verge which is well maintained. It is very narrow and at its lower end is flanked by red brick buildings on a cobble or granite plinth. This creates a sense of entering the village.

5.5 A side road off Back Lane slopes upwards past several semi-detached houses, to two detached bungalows and two sets of semi-detached bungalows with a group of eight garages opposite. All properties in this cul-de-sac date from the later half of the twentieth century and are more suburban in character. An offshoot of this road goes past The Cottage, a red brick house and round to The Bank where two 1960s bungalows are close to a row of old brick and slate cottages, the first of which was the Old Crown Public House.

5.6 The centre of Shearsby is a large (100m long) enclosed open space of the Green with an encircling road. The road at its lower and narrow end is The Square with substantial houses overlooking it and small old red brick cottages at the edge of the Green flanking it. In one corner is a small grassed area with a K6 telephone kiosk and water pump. The Green is the centre of the village structure. It is enclosed, in part by the buildings adjacent to The Square, in part to the south by a red brick wall, and partly by trees and bushes. The wall helps to emphasise the sense of enclosure round the Green. Around the Green are cottages and more substantial houses, in red brick or slate or rendered.

5.7 Four roads lead out from the Green and its encircling road. The narrow Back Lane rises up to the A5199. Mill Lane, with early cottages on either side, including the Grade II listed Rose Cottage, rises from the Green up away from the settlement to Bath Lane. It passes by the site of the old windmill mound from where it is possible to get panoramic views of the surrounding countryside. 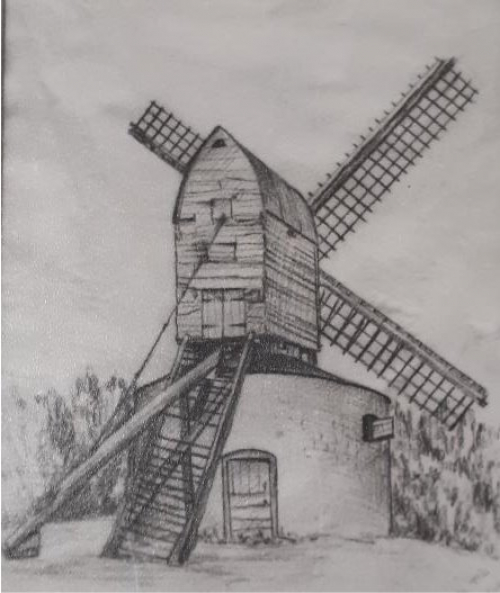 5.8 Fenny Lane is a short cul-de-sac with a combination of buildings of age and style ranging from the Grade II listed seventeenth century timber-framed thatched house to more modern houses and bungalows at the top of cul-de-sac. It rises from the Chandlers Public House up towards open countryside beyond the settlement boundary.

5.9 Church Lane is a longer, winding no-through road that leads north from the corner of the Square out to open countryside and the Public Right of Way to the neighbouring village of Arnesby. Being at the heart of the medieval settlement, this road contains a number of listed buildings, including the Grade II* listed St Mary Magdalene church and the Grade II timber-framed, thatched Yeoman's Cottage. The rest of Church Lane is a mixture of old and new, of working farms, farmhouses and yards, cottages, individual new houses and a more recent close of new houses whose materials and massing orientation are in sympathy with the irregular form of building in the lane. The use of Swithland and Welsh slate for houses, cottages and farm buildings is a notable feature of Shearsby.